in Wish list
Total Products
View my Wishlist
You have no items in your wish list.
Product added to cart
Menu
Account
Settings
Banting Sucks Health

Why miss out on pizza tonight? 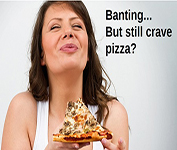 I didn’t eat pizza for years.

'Who needs it anyway,' I would say. In those days, I would avoid Italian restaurants, not wanting to be tempted by steaming plates of pasta or the smell of the pizza oven. Fresh fruit was also off the menu. I missed the crunch of a green apple, the taste of fresh mango and had to make do with berries and yoghurt. And don’t get me started on hot bread and buttered toast.

Initially, it was worth it. The first five kilos came off easily enough and I became a low-carb Banting convert. Then I hit a plateau. After that, nothing I tried worked. Not even dropping my carbs to 25 grams a day and exercising like an Olympic hopeful.

I soon found that I was not alone.

To make matters worse a few of my Banting patients did not even lose any weight at all. Some even gained weight! Women seemed to be affected the most, especially the over fourties. Also, some of the men were left with muffin tops peeping over their jeans after having good initial losses.

I struggled with this problem for almost two years.

I was desperate to understand why weight loss would stop or in some cases not happen at all. No matter how I tried, I could not find a reason. I even contacted some of the most famous low-carb specialists in the world to ask for their advice. Some of them admitted to having encountered the same problem. A few offered advice:

Eventually, I found the problem. It was insulin control.

Everyone agrees that high insulin levels make you fat and prevent weight loss. Banting is well aware of this and targets carbs because they raise blood sugar, which then releases insulin.

What Banting was missing is that protein also raises insulin levels.

Unfortunately Banters are left with little choice but to eat more protein to plug the gap left when they avoid carbs.

As a result, insulin levels in some Banters can't drop enough to get all the weight off!

One solution, punted by many low-carb specialists, is to raise fat intake to unnatural levels. This can work, but food boredom quickly sets in, leading to carb creep as carbs slowly edge their way back into the diet and weight loss stalls or even reverses.

Meal timing is the answer.

Instead of banning the whole carb food group, the best way to reduce insulin levels is by correctly timing meals. Correct timing turns out to be the polar opposite of mainstream advice, which is to eat many small meals every day.

Done properly, this allows insulin to drop really low for long periods and then to spike when a meal is eaten. This pattern of low levels broken by occasional sharp spikes, closely mimics the insulin levels of ancient times, when constant grazing and all-day availability of food was not an option.

Most importantly, periods of low insulin allow for fat burning. When insulin spikes again after a meal it does so as a big spike, which can better handle any carbs that are part of the meal. This allows for a relaxed attitude to carbs and opens the door to a wide variety of natural foods like fruit, potato, rice and even some pasta.

Whether you are a Banter experiencing plateau problems or a lover of carbs or just someone interested in the next revolution after low-carb diets, you need to know why Banting sucks.

Find out how you can time your meals to break that plateau, lose the muffing top, eat well, stress less and sleep better.

Read the book! Click here to have your copy courier delivered.

Or you can speak to me directly.